Preview: When looking through a seed catalog, you often see the term hybrid or open-pollinated. But what do these terms mean? This post will explain the difference between hybrid vs. open-pollinated seeds so you can select the right seeds for your garden.

What Do Hybrid, Open-Pollinated, and Heirloom Actually Mean?

Before we delve into whether you should choose hybrid vs. open-pollinated seeds for your garden, we need to define what these terms mean.

Open pollinated seeds are seeds that will produce plants genetically similar to the parent plant. If you plant Kentucky Wonder green beans and save the seeds, you will get Kentucky Wonder green beans when you plant the seeds next year. The one caveat is that some varieties need to be isolated (planted away from other varieties) so they don’t cross-pollinate themselves. Corn in particular has to be isolated.

Heirloom seeds are open-pollinated varieties that have been passed down from generation to generation. Some seed companies have decided on a set number of years old a plant has to be to be considered a heirloom. Others base the designation on just the history of the variety.

Hybrid plants are created when two open-pollinated varieties are crossed to form a new variety of the same plant. While the seeds of hybrids can be saved, they will not necessarily produce the same variety of fruit the next year. Actually, the majority of the time they will produce an inferior product. Hybrid seeds are often designated as F1 seeds in a garden catalog.

I want to stress that HYBRID is not the same as GMO (genetically-modified organism)! A hybrid crosses two VARIETIES of the same plant (two carrot varieties for instance) while GMO means the genetic makeup of the plant has been modified in a laboratory. It may mean that a plant has had genes from animals included. This is not the cross breeding that occurs in nature. (source: The Non-GMO Project)

Please also note that you can find both hybrid and open-pollinated ORGANIC seed!

There are many benefits to choosing open-pollinated (OP) varieties. First, you can save seeds from year to year, thus reducing your gardening costs. By keeping the best seeds each year, the plants gradually adapt to your particular growing conditions and climate. As each year passes the plants are better able to resist the stressors of your area. Even if you are purchasing seeds, open-pollinated varieties may be cheaper as only one distinct strain of genetics has to be maintained.

Another benefit to OP varieties is that the flavor of many of these varieties is vastly superior to their hybrid kinds. Many hybrids were bred for commercial production so they were selected to be uniform and hold up well during transport.

However, nowadays, with the resurgence in gardening, many breeders are doing a better job of taking flavor into consideration when coming up with new varieties.

Hybrid seeds can be a good choice, especially for a new gardener. Hybrids generally produce more per acre than OP varieties. So they are usually the best choice for gardeners with limited space available to grow a garden.

They also offer disease resistance that a lot of OP varieties don’t have, so new gardeners may find more success using hybrid seeds. (And for new gardeners, having success is important. I don’t want you wasting time and energy on a mediocre garden. You might get frustrated and give up.)

And if you have a short growing season, there are hybrid varieties of some crops that are bred to reach maturity faster. By using hybrid seeds, you can sometimes grow crops you wouldn’t otherwise be able to!

Hybrids also come in colors and sizes that you just can’t always find in open-pollinated varieties. If you are trying to expose your children to new and exciting vegetables, a different color may be just what they need to decide to taste it.

For instance, there is an yellow-orange cauliflower on the market (Cheddar) that is a hybrid, but may appeal to kids more than the plain white variety. (But it still tastes like cauliflower. – You’ll have to add your own cheese!?)

Another example are those mini lunchbox peppers. They are so tasty and sweet and so easy to pack? Well, almost all varieties are hybrids.

And don’t forget, those seedless watermelons we all love are hybrids too!

My take on hybrids vs. Open-pollinated seeds

So what do I think about hybrid vs. open-pollinated varieties? I think you should grow BOTH! If you have room for two tomato plants choose 1 hybrid and 1 OP. (If you only have room for one, I would go for a hybrid variety. You’ll get more tomatoes that way!)

For instance, in my garden, I grow Clemson Spineless Okra every year. It is an open-pollinated heirloom variety that grows relatively trouble free in my southern backyard. But I have a difficult time with powdery mildew in my garden so I grow a hybrid cucumber (County Fair is one of my favorites) each year so that I can ensure a good harvest. I usually grow a mix of hybrids and open-pollinated tomatoes. There is room for both in the garden!

So Which Should You Choose?

If this is your first year or two gardening, I would probably stick with hybrid or mostly hybrid seeds. The same goes for those of you who only have a small garden space. You’ll likely find more success and harvest more produce from your hybrid varieties.

If you have been growing hybrids but want to try your hand at a few open-pollinated varieties, I recommend starting with tomatoes, peas, lettuce, or beans. OP varieties of these crops abound and most are easy to grow in your backyard garden. 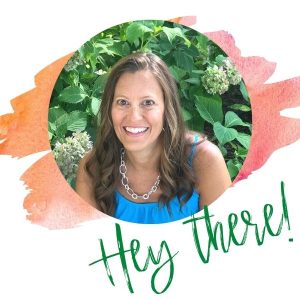 Hey there! I’m Julie B. I want to help you learn to be a bit more self-sufficient, no matter where you live. From growing your own food to DIY projects for yourself or others, I’m here to help you learn a few new skills. I’ll show you how to raise chickens in your backyard or grow a small container garden. Even if you live in the city, you can grow a few herbs or make your own lip balm. Let’s cultivate a good life…wherever we live. Read more about me…

DISCLAIMER: All content provided on Dogwoods & Dandelions is for informational purposes only. The owner makes no representations as to the accuracy or completeness of any information on this site or by following any link on this site. In accordance with FDA guidelines, the information and products offered on this website are not intended to diagnose, treat, cure, or prevent any disease. I am not a medical professional. Before administering any medications to your animals please contact a veterinarian first.

We are a participant in the Amazon Services LLC Associates Program, an affiliate advertising program. As an Amazon Associate I earn from qualifying purchases.

COPYRIGHT NOTICE: No content on this site may be reused in any fashion without written permission except as noted below.

Permission is not required to use one image and no more than 2 lines of text if you clearly provide a direct link back to the source of the image and/or text. I appreciate shares and features.